May 18, 2018 by della stanley Uncategorized 0 comments 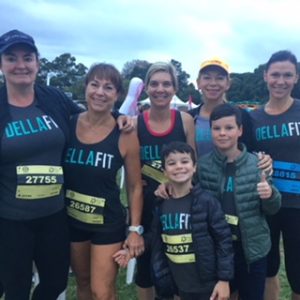 What a great way to celebrate Mothers Day! An early start, a beautiful track, good friends and a run.  Team Dellafit met at 6.30 am on Sunday 13 May at the Domain, Sydney.  We made our way past the aerobic warm up (which Suzanne insisted on doing) and the toilet stops to the start line.  Some of us were brimming with confidence (Mr 11), others not so much.

We were feeling lucky that it wasn’t raining as rain had been forecast.  It was also day 2 of a cold snap that had followed an unseasonably warm May so far.  As we waited on the the start line it did rain just a little but not enough to dampen our spirits which were running high.

I could sense on the part of some of our team a little nervousness at the start line.  A couple of team members reported having a bad night’s sleep as they felt a little anxious about what lay ahead.  But then… with the starter’s gun we were off.

I ran with my 6 year old son Darcy.  We actually held hands for a lot of the way.  I wanted to keep him at a slow pace so he wouldn’t get puffed out too early.  It worked – he managed to run the whole way and when the finish line was in sight – he sprinted away from me.  One of my other sons Henry who is 11 also ran for the second time this year and he made the finish in a very respectable time.

All team members finished and they all (as predicted) felt pretty darned pleased with themselves as they headed home after picking up some freebies and their medals at the finish line.

Three cheers for new found confidence.  For taking something on.  For seeing something through.  For challenging ourselves and making fitness part of our lives even on Mothers’ Day.

Why do you need high protein snacks? If you are a woman over 50 you need to...

4 Weeks Special Focus on YOU

Just in the last few days (now 5 weeks into the NSW lockdown) I have noticed...

We all want to kick up our heels (if we can remember where we put them) this...

Zaazee – new active wear all the way from the UK

After a few years of pretty much living in it I have come to realize that the...