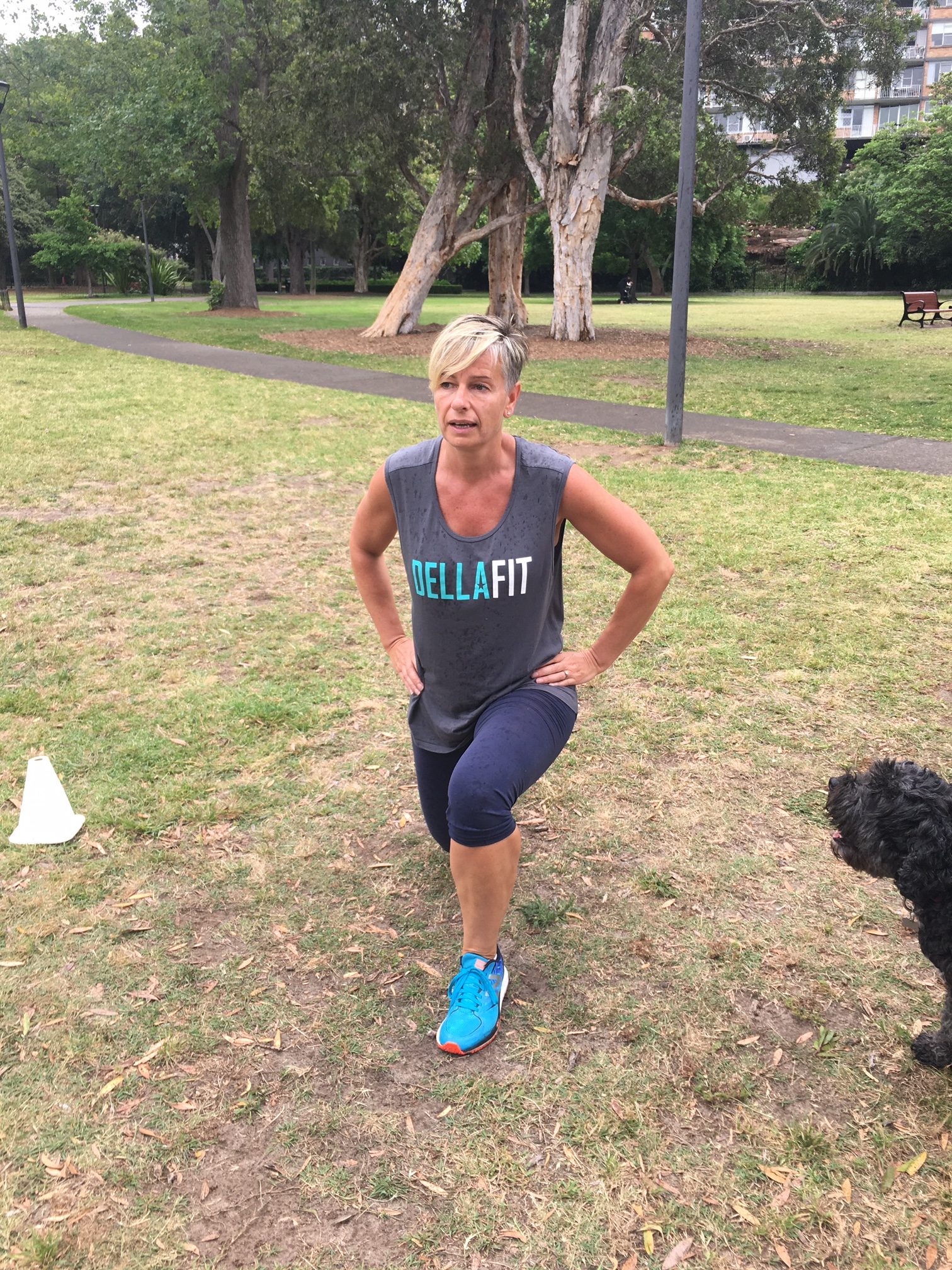 Lindsey is one of our most loved Dellafit clients.  She was actually at the first Dellafit session we ever had in mid 2013 and she is still with us!  This is the story of how Lindsey beat high cholesterol through sheer determination.

In January 2018 Lindsey went for a routine visit to a new doctor who ordered a full blood test.  The test revealed that Lindsey had very high cholesterol levels.

The doctor sent Lindsey for a coronary CT Scan to make sure that she had no plaque build up in her heart. Her score was low which meant that Lindsey could proceed to try to lower her cholesterol through a change in diet.  Lindsey was extremely keen to avoid taking the standard medications prescribed to bring cholesterol down, as she was not happy about the possibility of side effects.  She did not want to be stuck taking tablets for the rest of her life like her father.  The doctor told Lindsey that achieving a lower reading through diet alone was very difficult and would require a lot of discipline and some very big changes.  A determined Lindsey persuaded the doctor to give her 3 months to see if she could do it.

WHAT LINDSEY DID NEXT

Lindsey went away and used the doctor’s advice and also did a lot of her own careful research.  Almost overnight Lindsey changed what she was eating and drinking.  She brought the family along with her on her “journey” as she really wanted to avoid a situation where she was having to cook different meals for her and her husband and kids every night.  The doctor’s long list of “can’t haves” included butter, full fat milk, cake, chocolate, ice cream all animal fat products. Small portions of red meat were allowed (but not ideal due to the saturated fat content).  Lindsey immediately gave up all meat and increased her fish intake. She changed to light milk but ended up using mainly almond milk. Lindsey also increased her olive oil intake.

Going out to a restaurant became a matter of carefully choosing the restaurant to suit her new requirements or eating virtually nothing while out and having something to eat at home, later or before going out.  Lindsey found it frustrating having to ask the waiter about the ingredients in a particular dish as part of the ordering process but she was determined to stick to her new eating regime even when dining out.

What made all the changes that Lindsey put in place quite remarkable is that previously Lindsey had been a big consumer of meat – she loved pulled pork, she loved a juicy steak and she loved her ribs.  Before the health scare Lindsey ate the typical diet of someone who was trying to eat in a moderately healthy way but she was by no means a “health nut”.  The new stringent dietary requirements were quite a change from the relaxed attitudes she had to food and drink in the past.  But she was highly motivated, realizing that the consequences of failing would be a lifetime on cholesterol lowering medication.

At first Lindsey found it a little tough.  But the key was finding recipes within her requirements that were delicious.  At no time did Lindsey go without food – she just changed what she was eating – sticking to the foods that were allowed by the doctor with a big emphasis on vegetables.  Lindsey soon found that she was hardly eating any chicken or fish and that her diet had become almost entirely plant based.  Before she knew it she had new recipes, a new shopping list and a new found knowledge about how to fill up and be satisfied within the limits of the special “diet”.  In fact it actually became her way of eating rather than a “diet” of a temporary eating plan.  She had recipes for desserts and sweets that were within the rules, but strangely she no longer really felt like sweet foods.

Three months later.  Not only was Lindsey looking amazing (losing 8 kilos quite suited her) and her skin was glowing.  Her general mood was better.  She had more energy and started coming to more Dellafit sessions and going on long walks with Reggie the dog.  The long anticipated cholesterol tests took place and….. disappointment….. as the results were not what Lindsey wanted.  Lindsey’s combined cholesterol had gone down from 9.7 to 8.6 which was good but it was still too high. The doctor could see that Lindsey had clearly been taking the dietary advice seriously and encouraged her to keep going as the changes in diet can take a while to have an effect on cholesterol which is in the body for a long time.  The doctor sent Lindsey off to see a dietitian.  The dietitian was extremely impressed with Lindsey’s eating plan.  The only new suggestion was to try increasing her fibre consumption.

Undeterred Lindsey pressed on.  She found one way of increasing fibre in her daily intake was to have beans for breakfast and she became more determined than ever to achieve what had set out to do.  Lindsey continued to research and find new recipes that would do the job of keeping her full and happy.  Lindsey had unwittingly became an expert on cooking and eating a plant based diet.

Six months on, and now 10 kilos lighter, Lindsey underwent further tests and at last ……. SUCCESS!!!! She had reduced her combined cholesterol levels from a dangerous high of 9.7 to a much more acceptable level of 5.3 which is just above the recommended range.  All through diet alone and some Dellafit sessions too!

Dellafit cannot take the credit for the dramatic change that took place with Lindsey’s health.  But what we can say is that the regular training put Lindsey in the right frame of mind to stick to her healthy eating regime.

Training outdoors can be a real moral booster and it will set you up for the day feeling like you are on track.  Not only is Lindsey looking slim, she is looking fit and strong too. “Dellafit was a huge part of the process as through the diet changes I feel great but through Dellafit I feel stronger and mentally more motivated” says Lindsey.

Even though Lindsey’s cholesterol levels have reduced it will be a life long process for her to maintain her good results and she must have a blood test every 6 months to monitor things. Lindsey has moved to a predominantly plant based diet through her health scare but she highly recommends it to everyone. “Finding out I had high cholesterol was the best thing that ever happened to me. I feel and look better now at 49 than I have the last 15 years.”

Well done Lindsey we congratulate you for a major achievement.  Making such big changes, persevering for such a long time without much encouragement from the first set of results and finding a way to keep the eating regime as her new way of life is incredibly admirable.  We salute you!

Lindsey’s story shows that if you have a real goal (one that is measurable) and you are highly motivated it can really assist you in achieving a result.

Hi EveryoneTowards the end of last year we ran a "New You" program and...

Put yourself first every now and then

When looking after other people is something you do every day sometimes it's...

Boxing has really packed a punch at Dellafit. It has been a big hit. It...

How Fiona got the fitness bug

Fiona turns up to train 3 times a week without fail.  Her attitude...