Seal of approval for Dellafit 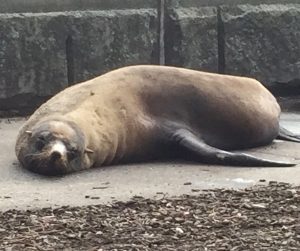 It was Sunday morning in the park just before our outdoor training session was about to begin and we noticed something very large was lying on the path near the stairs to the water.  “What on earth is it?” we all wondered. On closer inspection we discovered a seal – yes – a massive seal – lying on the path in our park!  He appeared to have come up the stairs from the water and was resting at the top on the path, minding his own business.  When approached by curious dogs or unsuspecting joggers using the path the seal would let out a very loud belching sound and move slightly but other than that he seemed quite happy to be resting in the sun.  We all watched him from a distance and called our kids to come to the park to see him.  It was very exciting to see a wild animal making an appearance in our inner city park.

Wildlife experts and the police turned up after a while and the area around the seal was cordoned off with crime scene tape.  According to the expert, seals can move very fast when they feel like it and they have sharp teeth.  For this reason leaving a distance around the seal of at least 40 metres was advised.   The seal eventually slipped back into the water.  Bye seal!!!  However…. the very next day – Monday – he made another appearance.  On Tuesday we heard that he had decided to go to Nielsen Park – how lovely.  But sad he had left our park for fairer shores.

We needn’t have worried – Wednesday he was back! The experts were worried though – they had hoped he would not come back as the situation as they saw it in Rushcutter’s Bay Park was problematic.  Too many dogs off the leash and poor lighting near the seal could lead to disaster if the seal was provoked and there was also the chance of the seal being injured too.  A plastic barrier was erected to try to discourage the seal.  The massive seal made easy work of the plastic barrier and turned up again on Thursday morning.  Our 6 am Dellafit class got quite a fright when we approached to see if the seal was there in the dark.  He let out a mighty belch and we ran back to our training session laughing and marveling at the seal who really seemed to enjoy coming back.  Later in the morning on Thursday the seal delighted onlookers as he had a swim close to shore and then came back to rest.  Our 10.45 am session included a run to the sea wall to watch the seal swim.

The experts spent Thursday erecting a massive metal barrier that would work to stop the seal approaching the stairs and coming in to the park.  The tragic sight of the seal banging against the barriers on Thursday evening made us all a bit sad.

We did not expect to see the seal on Friday – but incredibly – there he was – back on the path!  The wildlife ranger who had almost taken up permanent residence by this time explained that someone had (out of concern for the seal) cut the barriers to allow the seal to climb up into the park.  The authorities had underestimated the community sentiment – and how much the residents wanted the seal to stay.

A new solution was proposed and by Saturday an enclosure had been made for the seal on the path so that he could come and go without being in danger from dogs or people.

How wonderful having a seal at our outdoor training sessions!!!

Alas our joy was shortlived.  By Thursday of the following week the rangers and volunteers started to get worried about the condition of the seal.  Apparently he had a serious eye infection and he was losing weight rapidly.  In an attempt to get the seal some help (somewhat misguided we think) the seal experts from Taronga zoo were called.  The seal was sedated and stretchered into a van to be taken off to Taronga zoo for a check up.

There is a very sad ending coming up.  We found out the next day that the seal died on route to the zoo.  The sedative was obviously too much for him.  The do-gooders explained that the seal would have died anyway and that it would have been a long and lingering death.

We will never forget you seal. We will always look back to the time when we trained outdoors with a seal!

Zaazee – new active wear all the way from the UK

After a few years of pretty much living in it I have come to realize that the...

Planning your training and nutrition – you need a PLAN B too

This looks like a good planDo you do much planning when it comes to training...

Zoom workout for Monica at Dellafit. Would you like to join her?

Our lovely client Monica first came to Dellafit through the zoom workouts we...

Building self esteem through little “wins”

I am in the business of building self esteem. Many of our clients go from...