Daisy the dog has joined the crew .

Earlier this year I finally relented to the kids’ pleas and we got a dog. A beautiful rescue puppy from Kempsey called Daisy. I drove a long way to pick her up from her country foster parents (which was a big deal for some one who is a self confessed bad driver). Border collies need a LOT of exercise so I was a little apprehensive about whether we could keep her in the city. I figured if Daisy could be at the park with me for up to 3 hours most mornings we could probably tire her out enough to make everyone happy.

Soon I realized how lucky I had been to get Daisy. Even as a little pup she is amazingly well behaved at the Dellafit sessions. Her only transgression so far has been to occasionally run off, following another dog. On these occasions we have seized the chance to go for a group run to bring back Daisy. She gets along well with the other Dellafit dogs. Jen’s beautiful calm older cattle dogs keep her in line. Suzanne’s energetic Benson lets her chase him everywhere. Fiona’s young Ted gets rounded up regularly and Veronica’s more mature but still very lively Max lets Daisy give him lots of doggy kisses. Amanda’s Eno runs rings around Daisy but gets along with her really well. Lindsey’s Reggie is one of Daisy’s favourites and he puts up with a lot of puppy love.

Daisy has been an absolute joy to have around. I’m glad the kids pestered me so much. I don’t know what I ever did without her! Yes we have had a few moments when I could not believe how active and crazy our puppy could be. But on the whole it has been so rewarding.

One thing that Daisy has brought to my life is being a lot more “present”. I guess it is the same when you have a baby – you have to focus on just looking after the baby. With an active puppy it’s often a case of taking her on yet another walk – but I get to think and to be outside (and listen to lots of podcasts) and just be happy to alive and walking around with my beautiful pup. 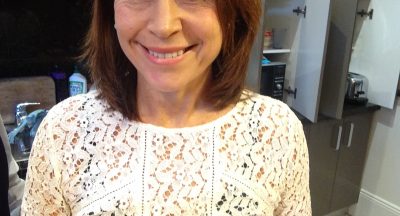 Do you need a nutrition coach?

I have recently qualified as a Level 1 Nutrition Coach through Precision...

There might be all sorts of reasons why you have not done any exercise for a...

Most of us can relate to a "diet" or a "health kick" more than "lasting...

Planning your training and nutrition – you need a PLAN B too

This looks like a good planDo you do much planning when it comes to training...