Veronica was a frequent gym user before she had children but once she had babies she found it hard to get motivated. She was naturally tall and slim but she knew as she approached her mid 40s that she needed to do strength work to maintain her muscle tone. A friend from her mother’s group (yes one of those mothers groups that existed for years after the babies were little) suggested she should try Dellafit at Rushcutters Bay Park. It is outside in a beautiful location, she could bring her dog and the other women there were great company.

Over 5 years ago Veronica attended her first session and she has attended every week since then (apart from a few holidays). When she first started Veronica trained twice a week without fail. In recent times Veronica has increased her sessions to 3 times a week because she can really feel the benefits from the regular sessions. Veronica is an example of how being consistent pays off. She is strong and fit and now as she approaches age 50 she looks very youthful and toned and she has plenty of energy.

It wasn’t all smooth sailing. Like many women in their 40s Veronica found herself stuck with an annoying injury – a frozen shoulder. Rather than quit her training, Veronica was advised by the therapist treating her shoulder to keep moving. Again her regular training saved the day. There were certain exercises which we needed to adapt but the regular sessions meant that her shoulder eventually made a full recovery. A great example of how it can be good to keep moving consistent with the advice of the person treating your injury.

Veronica is a marketing manager and the mother of 2 beautiful girls (a tween and a teenager) and a large poodle pup called Rosie. She loves being able to bring Rosie to the Dellafit sessions. She also loves the range of exercises on offer. The benefits of consistent training for Veronica are better mental health, better sleeping patterns, a stronger body and some lifelong friends.

Maybe you are in your mid 40s and starting to feel as though you should get moving more often. Although you know consistent training will benefit you – it’s hard to find something you will really stick to. The constant variety offered at Dellafit and the interesting company of other women in their 40s and 50s all in a beautiful outdoor location might be just the thing you are looking for. It worked for Veronica so maybe it will work for you.

Nothing seems to work for me anymore

Meet Alex – our member of the month for November

Usually it is a bit hard to figure out who should be member of the month.... 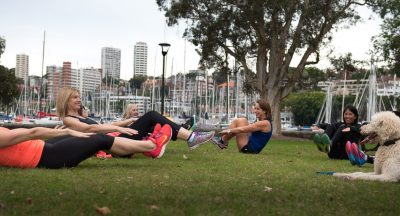 Here is a great workout you can do in 30 minutes with no special equipment....

Are you sabotaging your efforts?